Tehran 27January_A group of Yemen's religious scholars have strongly condemned a recent visit by senior Saudi cleric and former justice minister, Sheikh Muhammad bin Abdul Karim bin Abdulaziz al-Issa, to the former Nazi concentration camp, Auschwitz, in Poland along with a Jewish group, and all the Riyadh regime’s efforts to normalize relations with the Israeli regime after years of clandestine contacts. 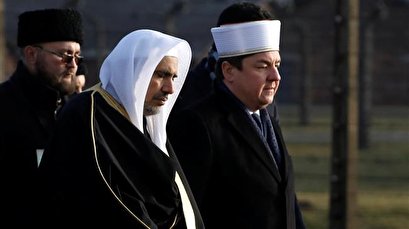 TEHRAN, Young Journalists Club(YJC)_“The suspicious visit took place under the permission and encouragement of the Saudi regime, and was aimed at normalization with the occupying Zionist regime. It was led by former Saudi justice minister and secretary general of the so-called Muslim World League (MWL), Muhammed al-Issa, and included some crooked scholars,” Yemen Scholars Association said in a statement released on Sunday.

The statement added, “Issa and his companions took an brazen step by praying at the site of alleged Holocaust in utter disregard to Islamic teachings," describing it as an unprecedented step on the path of normalization.

The association then categorically rejected any effort aimed at rapprochement, reconciliation and normalization of ties with the Tel Aviv regime, which occupies Palestinian territories and defiles Muslim sanctities.

It also called for a religious decree, which would end Saudi Arabia's jurisdiction over the mosques of Masjid al-Haram in Mecca and Al-Masjid al-Nabawi in Medina.

The association finally demanded an emergency conference at the level of Arab and Muslim scholars, where thinkers would discuss matters of paramount importance, especially the issues of occupied Jerusalem al-Quds and Palestine.

The statement came a day after Mohamed Abdel-Salam, a spokesman for Yemen’s Houthi Ansarullah movement, denounced Saudi Arabia’s efforts to normalize ties with the Israeli regime in the name of Islam.

“The miserable Kingdom of Saudi Arabia must stop using Islam in favor of colonialists. The kingdom’s offense to exploit Islam is condemned both religiously and by all Muslims,” Abdel-Salam said in a post published on his Twitter page on Saturday.

On Thursday, Issa led a delegation of 62 Muslims, including 25 prominent religious scholars, from some 28 countries during a visit to Auschwitz camp. A delegation of American Jewish Committee (AJC) officials was in the company as well.

The CEO of the AJC, David Harris, described Issa’s visit to the site as highly significant, claiming that the trip represented “the most senior delegation" of Muslim scholars to visit Auschwitz ever.