Tehran 28January_The chief commander of Iran's Islamic Revolution Guards Corps (IRGC) says none of American military commanders would be safe in any part of the world, if the US administration continues to threaten the Iranian commanders. 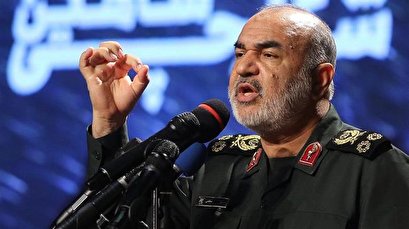 TEHRAN, Young Journalists Club(YJC)_Major General Hossein Salami made the remarks while addressing a gathering of Basij commanders on Monday in reaction to recent threats by US officials to kill more Iranian commanders after Lt. Gen. Qassem Soleimani, the late commander of the IRGC’s Quds Force, and his companions were assassinated on direct order of US President Donald Trump in Iraq on January 3.

In an interview with the Saudi-owned newspaper Asharq al-Awsat on the sidelines of the World Economic Forum (WEF) in Davos, Switzerland, US special representative for Iran Brian Hook threatened the Islamic Republic with yet another act of state terrorism, saying Washington will assassinate the successor of the late IRGC commander as well if he follows in the path of the martyred general.

“If (Esmail) Qaani follows the same path of killing Americans then he will meet the same fate,” said Brian Hook, referring to the new commander of the anti-terror Quds Force.

On January 3, the United States assassinated Lieutenant General Soleimani, among others, in an air raid on an airport in the Iraqi capital of Baghdad. The strike also led to the martyrdom of second-in-command of Iraq’s Popular Mobilization Units (PMU) Abu Mahdi al-Muhandis along with eight other Iranians and Iraqis.