PM Abdul Mahdi urges US to de-escalate tensions in region

Tehran 28January_Iraqi Prime Minister Adel Abdul Mahdi has, in a phone call with US Secretary of State Mike Pompeo, stressed the need for the de-escalation of tensions in the region. 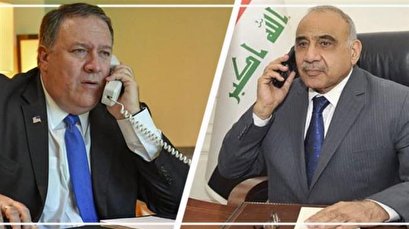 TEHRAN, Young Journalists Club(YJC)_In the Monday phone conversation, Abdul Mahdi called for the respect of his country’s sovereignty by everyone, according to a statement by his office.

He also condemned Sunday’s attack on the American embassy in Baghdad, and pledged to beef up security to protect the diplomatic mission.

At least one rocket struck a dining facility at the US embassy compound in the Iraqi capital of Baghdad on Sunday.

A US official told CNN that one person was injured in the attack, but that the injury was minor and the individual had since returned to duty.