Trump deal: A prize for Israel at the expense of Palestine

Tehran 28January_Just as US President Donald Trump is taking time off his controversial impeachment trial to unveil his much hyped-up peace plan for the Israeli-Palestinian conflict, a potentially explosive situation is unfolding in Palestinian territories where there is huge resentment among the leadership and the people towards the so-called ‘deal of the century.’ 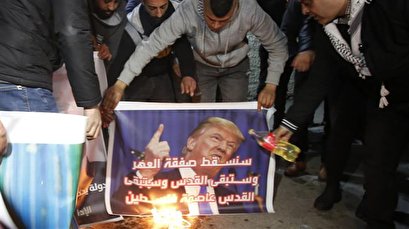 TEHRAN, Young Journalists Club(YJC)_Palestinians argue that one primary flaw of Trump’s deal is that despite presumably offering a recipe for peace between Israelis and Palestinians, it totally excludes and sidelines them, as one side of any mutual agreement.

Palestinians view the deal as Washington’s seal of approval for Israel’s long-desired annexation of their territories it has been illegally occupying for decades, in total disregard for UN Security Council resolutions and the opposition by the vast majority of the international community.

The timing for the unveiling of the deal has also drawn much attention as both President Trump and Israeli Prime Minister Benjamin Netanyahu are embroiled in major national scandals. The US president is in the midst of an impeachment trial, while the Israeli premier is facing three corruption indictments.

Palestinian leaders from different factions raised their voices on Monday against the US-devised deal and stressed the need for popular resistance in the face of the American scheme which Trump prepares to unveil in the presence of Israeli leaders at 17:00 GMT on Tuesday.

Palestine has already rejected the so-called peace plan as “the slap of the century.”

The scheme is reported to be hugely biased towards the Tel Aviv regime by extending Israel’s “sovereignty” over all settlements and annexing the Jordan Valley in the West Bank.

Washington released the economic portion of its initiative during a conference last June, which was boycotted by Palestinians and supporters of the Palestinian cause against Israel’s decades-occupation.