Tehran 30 january_Iran's President Hassan Rouhani has condemned US President Donald Trump's so-called 'peace plan' for the Israeli-Palestinian conflict as 'the most despicable plan of the century.' 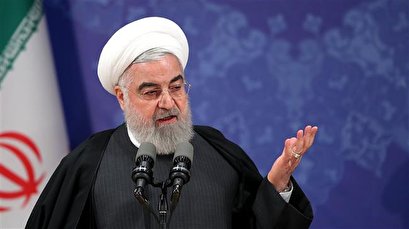 "The Most Despicable Plan of the Century," he added.

Enough of these foolish attempts. The Most Despicable Plan of the Century.#DespicablePlan

Meanwhile, Iran's Parliament Speaker Ali Larijani also referred to Trump's self-proclaimed "deal of the century" as a dangerous plan for the West Asia region which, describing it as a ploy devised to make up for the failures of the United States and the Israeli regime.

"We have to try to make all Muslim countries united against this illegal and inhuman agreement," Larijani said while speaking in a phone conversation with Syrian Parliament Speaker Hammouda Sabbagh on Wednesday.

"In fact, this deal and treasonous conspiracy is designed to fulfill the wishes of the Israeli regime in the region," Larijani noted, adding that despite the claims of the US officials, the plan has nothing to do with the interests of the Palestinian people.

Defying the international outcry, Trump announced the general provisions of the plan at the White House on Tuesday with the Israeli premier at his side.