Tehran 30 january_French President Emmanuel Macron has lambasted his Turkish counterpart, Recep Tayyip Erdogan, for sending warships and “mercenaries” to crisis-hit Libya, stressing that Ankara is breaching an agreement reached at a summit in Berlin earlier this month to halt foreign interference in the North African country. 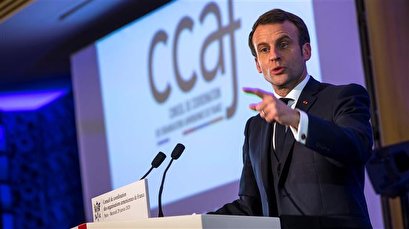 TEHRAN, Young Journalists Club(YJC)_These past few days we have seen Turkish warships accompanied by Syrian mercenaries arrive on Libyan soil. This is a serious and explicit infringement of what was agreed upon in Berlin,” the French president said on Wednesday, referring to a multinational summit held in the German capital earlier this month.

Since 2014, two rival seats of power have emerged in Libya: the internationally-recognized government of Prime Minister Fayez al-Sarraj, and another group based in the eastern city of Tobruk, supported militarily by rebel forces under the command of a renegade general, Khalifa Haftar.

The rebels launched an offensive to capture the capital, Tripoli, in April last year. Despite intense fighting, they have so far failed to achieve their objective, and the offensive has stalled outside the capital.

Turkey reached a military agreement with the Libyan government recently and, on a request from Sarraj, pledged to send troops to Libya to help his government defend itself against Haftar’s attacks. While Ankara has since the Berlin summit said it would hold off the dispatch of troops to Libya, reports had already emerged of Turkey sending allied militants from Syria to the North African country