Tehran 1 February _An Egyptian court has sentenced Hisham al-Ashmawy, one of Egypt’s most notorious militants, and 36 other defendants to death after they were convicted of terrorism, judicial sources say. 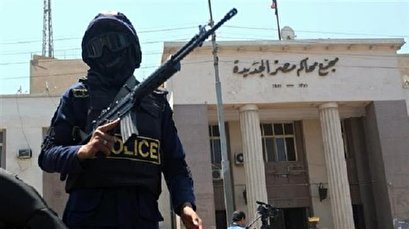 TEHRAN, Young Journalists Club(YJC)_The Cairo Criminal Court on Saturday said that Ashmawy, a former special forces officer-turned-militant, was convicted on several charges, including plotting a 2014 attack that killed 22 military guards near the frontier with Libya, and involvement in an attempt to kill a former interior minister in 2013.

The court also ruled that the other 36 defendants tried with him were also convicted of terrorism charges.

The sentencing papers were referred to the grand mufti, Egypt’s top Muslim religious authority, who reviews all death sentences.

Egyptian law requires any capital sentence to be referred to him for an opinion before executions can take place.

The court has set a new session for March 2 to confirm the convictions after receiving the Mufti's non-binding opinion.

In November last year, a military court had already sentenced Ashmawy to death in another terrorism case.

Ashmawy was detained in the eastern Libyan city of Derna in late 2018 and transferred by authorities loyal to renegade military commander Khalifa Haftar to Egypt in May last year.

Egyptian civilian and military courts had also sentenced Ashmawy to death in absentia before his extradition.

Ashmawy led the Velayat Sinai terror outfit, Egypt's most active militant group, before it pledged allegiance to the Daesh Takfiri terrorist group in 2014. Many Daesh militants also fleeing Syria and Iraq are believed to have traveled to Sinai.

The Velayat Sinai terror group has claimed responsibility for most of the assaults across Egypt, particularly those in the Sinai region, where the group is based.

It later expanded its attacks to target members of Egypt’s Coptic Christian community as well as foreigners visiting the country, prompting Cairo to widen a controversial crackdown, which critics say has mostly targeted dissidents