Tehran 16 February _Iran has denounced the international community's silence on Saudi airstrikes, the latest of which killed at least 31 civilians in Yemen's al-Jawf province Friday, calling it a war crime. 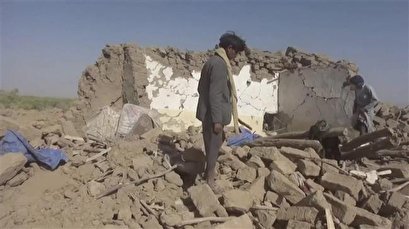 The United Nations office in Yemen said preliminary field reports indicated that "as many as 31 civilians were killed and 12 others injured in strikes that hit al-Hayjah area" in al-Jawf province.

The health ministry in al-Jawf province said women and children were among those killed, Yemen's al-Masirah TV reported. They were attacked as they gathered near the wreckage of a Saudi warplane shot down on Friday evening.

“Over the past several years, we have repeatedly witnessed that whenever Saudi-led coalition forces or their allies suffer humiliating defeats in the battlefield, they react by cowardly slaughtering women, children and civilians with American weapons,” Mousavi said.

"Yesterday's crime in Jawf province is just one example among dozens of their war crimes," he added.

Saudi Arabia’s state-run news agency quoted military spokesman Col. Turki al-Maliki Saturday as saying that the tornado warplane belonging to the kingdom's air force had been shot down over the province of Jawf on Friday.

Yemeni forces said they shot down the warplane with an advanced surface-to-air missile.