US policy of 'maximum pressure' on Iran failed to achieve goals: President Rouhani

Tehran 16 February _Iran's President Hassan Rouhani says the US policy for exerting 'maximum pressure' on Iran has already failed and all economic indexes show that the country has weather the worst phase of that policy. 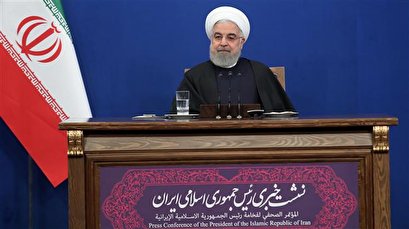 TEHRAN, Young Journalists Club(YJC)-Rouhani made the remarks in a press conference with domestic and international media in Tehran on Sunday, saying, “All [economic] indexes show that we have weathered [the worst phase of] the US maximum pressure [policy]. Americans have reached the conclusion that the path they have chosen [for dealing with Iran] has been based on a wrong strategy.”

The president continued by saying that although US sanctions have caused come problems for the Iranian people by affecting their ordinary lives, they will fail to bear fruit and will not benefit the country's enemies.

He added that the United States started to exert maximum pressure on Iran more than 20 months ago but Tehran has managed to better the conditions over the past six months.

"Therefore, sanctions and maximum pressure have failed. We are faced with better circumstances in the region in comparison with two years ago and we have unity in the country," he emphasized.