Pelosi urges Democratic unity to prevent Trump from getting re-elected

Tehran 16 February _Speaker of the US House of Representatives Nancy Pelosi has called for further unity among Democrats and their candidates in the upcoming presidential election in order to ensure President Donald Trump would not get elected for a second term. 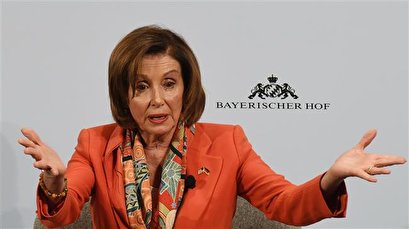 TEHRAN, Young Journalists Club(YJC)-"We have to have our own vision for the future, but everybody knows that we must be unified in making sure that he doesn't have a second term," Pelosi said in an exclusive interview with CNN from the Munich Security Conference on Saturday.

Pelosi also told the American TV news channel that she "can't even envision a situation" where Trump would be re-elected, but added, "We don't take anything for granted."

The House speaker underlined that any of the candidates in the crowded Democratic field "would be a better president than the current occupant of the White House, but we want to be very positive about how we go forth."

The Democratic Party started with about 20 hopefuls for the 2020 US election race but the filed has so far shrunk to eight following the Iowa caucuses and New Hampshire primary.