Trump calls for end to Russia’s support for Syria

Tehran 17 February _US President Donald Trump is calling for an end to Russia’s support for the Syrian government, engaged in efforts to liberate the whole country. 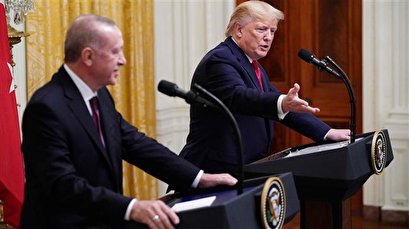 TEHRAN, Young Journalists Club(YJC)-Trump "expressed concern over the violence in Idlib, Syria, and... conveyed the United States' desire to see an end to Russia's support,” in a call with his Turkish counterpart, Recep Tayyip Erdogan, on Sunday.

Turkish Foreign Minister Mevlut Cavusoglu expressed a similar sentiment among  journalists at the Munich Security Conference after he talked with his Russian counterpart, Sergei Lavrov.

"I stressed that the attacks in Idlib must stop and it was necessary to establish a lasting ceasefire that would not be violated," Cavusoglu claimed.

The comments were made as Syrian government forces were making significant advances in the country's northwestern province of Aleppo.

As the director of the so-called Syrian Observatory for Human Rights has put it, "in day one, they took an area where for eight years they could not take a single village."