Tehran 17 February _President Bashar al-Assad has congratulated the Syrian nation and government forces over major territorial gains made in the country’s embattled northwestern province of Aleppo following intense battles with foreign-sponsored Takfiri militants, emphasizing the achievements do not mark the end of the campaign against terrorism that has plagued the country. 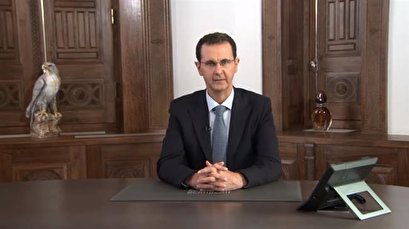 TEHRAN, Young Journalists Club(YJC)-“When the city of Aleppo was fully liberated back in [December] 2016, I highlighted that the status quo will be ... the same as it used to be. I well knew that Syrian Arab Army soldiers are fighting wholeheartedly, and the patriotism of Aleppo residents together with their sense of affiliation to their ethnic homeland and army will alter the calculations of the enemies,” Assad said in a televised speech broadcast live from the capital Damascus on Monday evening.

He added, “Years of violent and barbaric [militant] shelling of most Aleppo neighborhoods left tens of thousands of people dead, injured, orphaned and widowed. Years of siege without running water, electricity or other basic necessities were meant to bring the people of Aleppo to their knees.

“With any shell that fell on Aleppo, the enemies would entertain the hope that the city’s identity would change to what it never used to be. They dreamed of creating an Aleppo that would not be in harmony with Damascus at all, and whose people would capitulate to them for a few dollars and much disgrace.”