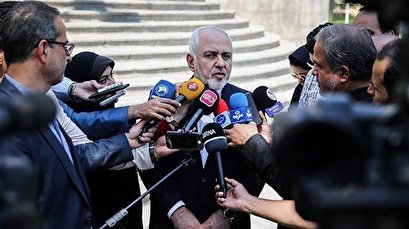 TEHRAN, Young Journalists Club(YJC)-“If we want to strengthen the hand of my team in foreign policy [arena] so that they can more seriously counter the sanctions… we have to compel the US to come back to the negotiating table, not bilateral talks but the negotiations that the US has left and that is the P5+1 talks,” Zarif told reporters on Wednesday on the sidelines of a cabinet session.

“As the Leader said for the US to wake up to its defeat and come back to the negotiating table, lift sanctions and make up for the losses incurred on the Iranian nation, it needs to know and see that the sanctions have been ineffective and people participate in the elections fervently. This is the biggest boost to the Islamic Republic’s diplomacy to counter the US’ policies,” he added.

Zarif said it is time that the US understood its “maximum pressure policy” had failed.

The top Iranian diplomat said the Iranians showed through their massive participation for the funeral processions of Lieutenant General Qassem Soleimani, the commander of the Quds Force of the Islamic Revolution Guards Corps, that they do not accept the US’ policies and would defend their country against Washington.

“The best manifestation for this support is participation in the election,” he added.

Iran is to hold the parliamentary elections on February 21 for the 11th Majlis (Parliament) since the 1979 Islamic Revolution.

More than 7,000 candidates are to vie in the polls for 290 seats, five of them representing religious minorities.