Tehran 21 February _Five men and two women have been detained by police in Vietnam for human trafficking in connection with the deaths of 39 Vietnamese migrants whose bodies were found in Essex, the United Kingdom, in October last year. 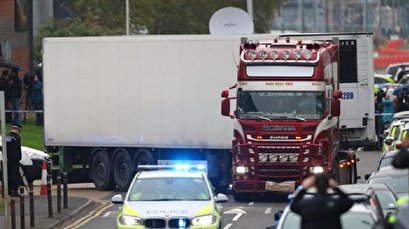 TEHRAN, Young Journalists Club(YJC)-Police in Vietnam's Ha Tinh Province said the seven individuals, one of whom is originally from China, were charged with "organising or broking others to flee abroad or stay abroad illegally."

Post-mortem examinations on the victims, who were found on a lorry in Essex, listed the provisional causes of death as a combination of hypoxia and hyperthermia, Essex Police said at the time.

Essex Police also said an investigative team of 12, comprising police officers and staff, had travelled to south-east Asia to look into the deaths.

Specialists from the National Crime Agency and Vietnamese officers will be joining them for their visits.

Several people, including the lorry driver, Maurice Robinson, of Craigavon, County Armagh, have been arrested in connection with the deaths and involvement in an alleged people-trafficking ring.

At the Old Bailey in November, Robinson admitted conspiring to assist illegal immigration and acquiring criminal property, the BBC reported.