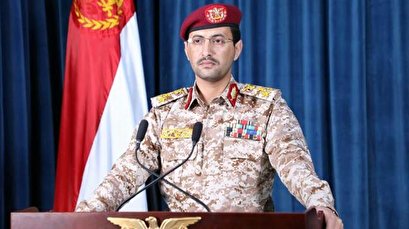 TEHRAN, Young Journalists Club(YJC)-The spokesman for Yemeni armed forces, Brigadier General Yahya Saree, said in a press conference in the capital Sana’a that Yemeni missile operators together with air defense units launched an operation, dubbed 'The Third Balance of Deterrence Operation', on Friday and struck energy facilities in addition to sensitive sites in the Saudi port city of Yanbu, situated about 165 kilometers west of Medina.

Saree further noted that Yemeni forces used a squadron of 12 Sammad-3 (Invincible-3) combat drones as well as a volley of winged and long-range ballistic missiles to strike the important targets.

He went on to say that Yemeni armed forces reserve the right to respond to crimes being perpetrated by the Saudi-led military alliance against the Yemeni nation – the last of which took place on February 15 when more than 30 civilians were killed and many more sustained injuries in airstrikes on Yemen’s northern province of Jawf.