Tehran 22 February _The Russian and Turkish heads of state agree during a phone call to step up their bilateral consultations concerning the situation in the terrorists-infested northwestern Syrian province of Idlib. 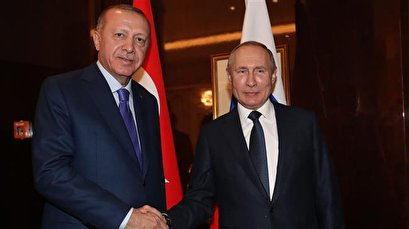 TEHRAN, Young Journalists Club(YJC)-Russian President Vladimir Putin and his Turkish counterpart Recep Tayyip Erdogan agreed during the conversation that took place on Friday to "intensify bilateral consultations on Idlib with the aim of reducing tensions, guaranteeing a ceasefire, and neutralizing the terrorist threat," the Kremlin said in a statement.

Putin, for his part, told his Turkish counterpart that he was "seriously concerned" by the "aggressive actions" of Takfiri terrorists in the province.

The province contains the largest remaining concentrations of the terrorists, who have fled there since September 2015, when Russia began lending airpower to Syria’s counter-terrorism operations.

Backed by the Russian aerial support, the Syrian military has enhanced its anti-terror efforts in Idlib over the past months.

The advances have liberated many areas across Idlib, including some hosting Turkish observation posts. Turkey began setting up the facilities in the province in 2018, when it agreed to cooperate with Russia to contain the situation in the vicinity of the Turkish border.

Turkey claims that more than a dozen of its troops have died during clashes with the Syrian forces. It has been sending huge reinforcements to Idlib, has threatened an “imminent” assault on the Syrian military, and asked Russia to “stop” the Syrian gains.