Leader thanks Iranians for 'shining in election test', urges vigilance

Tehran 23 February _Leader of the Islamic Revolution Ayatollah Seyyed Ali Khamenei has thanked the Iranian nation for its "satisfactory shining in the great election test", saying the country has yet to remain alert against plots by the enemy to harm Iran. 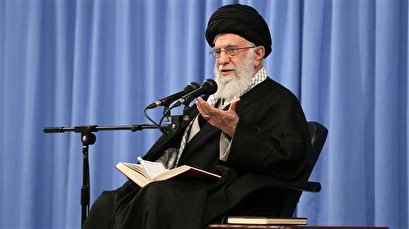 TEHRAN, Young Journalists Club(YJC)-"In the face of the enemy's conspiracy to hit various pillars of the country, we all need to be vigilant in defense and ready for attack and counterattack," the Leader said Sunday at a seminary lecture.

Iranians went to the polls in the country's first general elections since the US imposed sanctions following the pullout from the 2015 nuclear deal and assassinated General Qassem Soleimani.