Pompeo drums up 'Iran threat' on visit to Saudi Arabia

Tehran 23 February _Secretary of State Mike Pompeo has repeated trumped-up "Iran threat" on a visit to Saudi Arabia amid US push to sell more arms to Riyadh, which is America's number one weapons buyer. 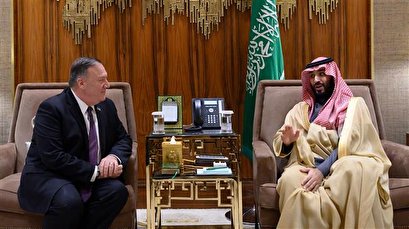 Pompeo "assured the Crown Prince that the United States stands with Saudi Arabia in the face of these threats, as reflected in our greater military presence in Saudi Arabia," US State Department spokeswoman Morgan Ortagus said in a statement.

Pompeo also visited Sultan Air Base near the Saudi capital, where some 2,500 US troops have been stationed since last summer.

"The visit to Prince Sultan air base and a nearby US Patriot battery highlights the longstanding US-Saudi security relationship and reaffirms America's determination to stand with Saudi Arabia in the face of Iranian malign behavior," the State Department said.

The base is home to a squadron of US Air Force F-15E fighter jets that fly daily missions over Iraq and Syria and Patriot missile batteries.

Pompeo’s visit to Saudi Arabia revolved mostly around countering Iran, although he was forced by a group of US Senators to address the issue of imprisoned US citizens inside Saudi Arabia.