Tehran 24 February _Iran’s President Hassan Rouhani says the Islamic Republic expects the European Union to object to the illegal measures taken by the United States against Iran and ignore Washington’s pressure policy in order to boost Europe’s ties with Tehran. 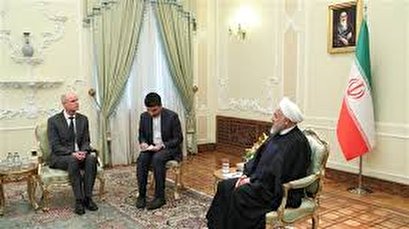 TEHRAN, Young Journalists Club(YJC)-"The EU is expected to stand firm in the face of the illegal measures taken by the US," Rouhani said in a Sunday meeting with Austrian Foreign Minister Alexander Schallenberg in Tehran.

“Like the coronavirus, the fear inspired by the US sanctions is more than what their real nature deserves,” the Iranian president said.

Pointing to the US economic sanctions against the Iranian nation, which also include medicine and food, Rouhani added, "Imposing such sanctions is an act of terror and we expect the European Union to fulfill its humanitarian duty in this regard."

He said Iran’s initiative for regional security, known as the Hormuz Peace Endeavor (HOPE), is aimed at establishing peace in the region, adding, "All the problems in our region are rooted in Washington's inappropriate and illegal interference in regional issues."

In an address to the 74th session of the United Nations General Assembly on September 25, Rouhani invited all countries that are affected by developments in the Persian Gulf to join the country’s initiative for the security of the strategic region.

He said that the 'Coalition of HOPE' aims to promote peace, stability, progress and prosperity of littoral states and help achieve mutual understanding and establish peaceful and friendly relations among them.

Elsewhere in his remarks, Rouhani emphasized that the landmark 2015 nuclear deal, officially known as the Joint Comprehensive Plan of Action (JCPOA), does not only belong to Iran, Europe or the P5+1 group of countries (the United States, Britain, France, Russia, China and Germany) with whom Iran clinched the deal, because it can play a determining role in improving peace and security on a global scale.

"We still believe that we can preserve the JCPOA," the Iranian president stated.

In response to the unilateral move, Tehran has so far rowed back on its nuclear commitments four times in compliance with Articles 26 and 36 of the JCPOA, but stressed that its retaliatory measures will be reversible as soon as Europe finds practical ways to shield the mutual trade from the US sanctions.