Tehran 26 February _The death toll from the latest bout of violent clashes between supporters and opponents of an anti-Muslim law in India's capital has risen to 20, prompting a top executive official in New Delhi to call for the army's intervention as well as a curfuew. 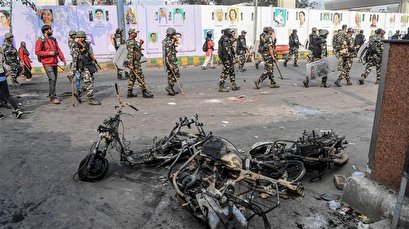 TEHRAN, Young Journalists Club(YJC)-An official at the Guru Teg Bahadur Hospital said on Wednesday that at least 20 people had been killed and 189 others wounded in the clashes coinciding with a visit to India by US President Donald Trump.

At least 15 people were also hospitalized in critical condition.

Hindus have been clashing with Muslims in the Indian capital since Sunday. The clashes erupted when Hindus confronted Muslims protesting a citizenship law introduced by the government of Prime Minister Narendra Modi.

Critics of the law say it is biased against Muslims. Under the law, migrants from Bangladesh, Pakistan, and Afghanistan will be allowed to claim Indian citizenship — but not if they are Muslims.

On Tuesday, a Hindu mob set a mosque on fire in the Ashok Nagar area of the capital.

Later on Wednesday, Delhi’s chief minister called on the Indian government to impose a curfew and deploy the army in areas of the capital affected by the riots.

“I have been in touch (with) large no of people whole nite. Situation alarming. Police, despite all its efforts, unable to control situation and instill confidence. Army (should) be called in and curfew imposed in rest of affected areas immediately,” Arvind Kejriwal tweeted.

He added that he was requesting the central government to impose the curfew.

India has been engulfed by protests since early December last year, when the country’s parliament passed the citizenship act. But the recent riots in the capital mark the first major instances of violence related to the law.

The latest outbreak of violence coincided with the visit of Trump, who held bilateral meetings with Modi in New Delhi on Tuesday.

Modi’s government is accused of encouraging religious intolerance and seeking to transform India into a Hindu state. Trump has been facing accusations of religious bigotry and racism at home for his travel ban on several Muslim-majority countries.