Tehran 26 February _Two anti-Iran senators from different parties have teamed up to come up with a plan to reach a new nuclear deal with Iran. 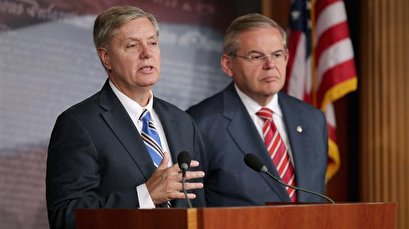 They have assured the European leaders that the final deal would be ratified by the Senate in order to avoid the fate of the previous nuclear deal with Iran, scrapped by the US President Donald Trump.

The new scheme allegedly includes the allies of the United States in the Persian Gulf.

The plan reportedly offers free access to to nuclear fuel for civilian energy purposes. In exchange, both Iran and the Persian Gulf countries are expected to abandon fuel enrichment inside their own countries forever. Iran would also benefit a limited sanctions relief.

“The goal is to give Iran nuclear power without enrichment. That way they can have what they say they want, nuclear power. And the world never has to worry about a bomb, because you can’t make a bomb unless you enrich,” Graham claimed.

Tehran has maintained that nuclear enrichment is its absolute right, thus non-negotiable.

Over the last 2 days in Tehran, good meetings with Dutch FM @ministerBlok and Austrian FM #Schallenberg. Emphasized importance of preserving the #JCPOA through action—living up to commitments made—on the part of the #EU. pic.twitter.com/yhRAePiUaH

Based on the Graham-Menendez plan, Washington and Tehran would subsequently negotiate a comprehensive agreement includding restrictions on Iran’s missile program in exchange for broader sanctions relief.

Iran has time and again asserted that ts missile program is merely defensive and peaceful. Tehran has also repeatedly said that it would not negotiate while being under pressure.

Ali Akbar Salehi, head of the Atomic Energy Organization of Iran, reiterated in a recent meeting with the Director General of the International Atomic Energy Agency (IAEA) Rafael Grossithat  that Tehran is open to talks on the country’s nuclear program but will not bow to pressure for its decisions.