Tehran 28 February _Iraqi fighters from the Popular Mobilization Units (PMU), better known by the Arabic word Hashd al-Sha’abi, have launched a major operation in the western countryside of Anbar province to hunt down the remnants of the Daesh Takfiri terrorists. 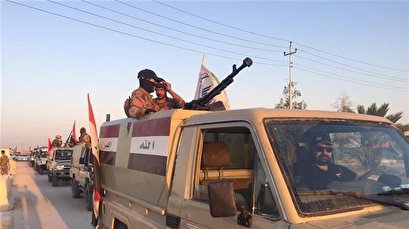 TEHRAN, Young Journalists Club(YJC)_Commander of Anbar Operations for the PMU Qassim Musleh said in a press statement that his fellow fighters had mounted a multi-pronged offensive, codenamed 'Leaders of Victory,' on Friday to clear the districts of Medisisa‎ and Salloum Forest, which lie south of the town of Qa'im and nearly 400 kilometers northwest of the capital Baghdad, besides the areas of Akra and Hamid Turky, Shaleej village and Beit Ajaj region.

Muslem said Hashd al-Sha’abi forces were pressing ahead with the operation irrespective of far-flung geographic areas and rugged terrains that terrorists use to either hide or camouflage.

He emphasized that the campaign will continue until its goals are fully achieved.

On September 21, 2019, the PMU announced the conclusion of a campaign against the sleeper cells of Daesh in the central parts of the country as well as a sector of the vast western desert leading to the border with Saudi Arabia.

The PMU media bureau announced in a statement at the time that the fifth phase of the 'Will of Victory' operation, which had started on September 16, was wrapped up as different units and forces of Iraqi military forces cleared the remote territory between the provinces of Karbala, Najaf and Anbar.