Tehran 29 February _A team of Chinese medical specialists have arrived in Iran to assist in the country’s fight against the coronavirus (COVID-19) outbreak. 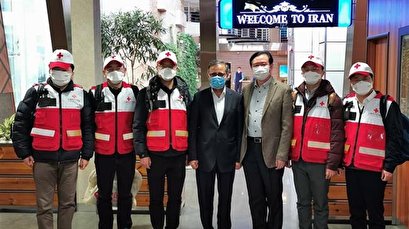 TEHRAN, Young Journalists Club(YJC)_Chinese medical specialists have arrived in Iran along with a new shipment of supplies from China," Beijing's Ambassador to Tehran Chang Hua tweeted in Farsi on Saturday.

According to a tweet by Iran’s mission in China, a second shipment of Chinese aid supplies comprising of 50,000 coronavirus test kits and oxygen production machines have also been prepared to be sent to Tehran on Saturday night.

A first batch of aid supplies arrived in Iran on Friday and additional shipments will be sent in the future, according to reports.

'Worst of times reveals the best in people'

On Friday, China's Ministry of Foreign Affairs spokesman Zhao Lijian said the country has sent aid shipments to Iran as a sign of gratitude towards Iran’s earlier assistance to China, which has been struggling to contain the outbreak since December.

“The Iranian government has given China sincere support and assistance after the epidemic broke out. We thank them and will remember that for always,” Zhao said.

“Virus knows no borders, but the worst of times reveals the best in people,” he added.

The Chinese assistance comes as Iran had previously sent aid to China and expressed support for the country’s battle against the outbreak.