Tehran 29 February _Russia says it has agreed with Turkey to ease tensions in Syria's embattled Idlib province, the last major terrorist stronghold in the war-torn country. 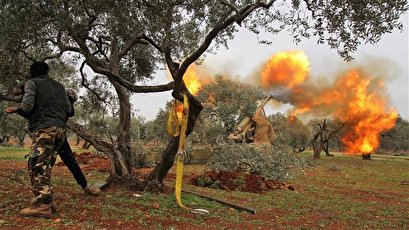 TEHRAN, Young Journalists Club(YJC)_In a statement released on Saturday, the Russian Foreign Ministry said that Moscow and Ankara had during high-level talks reached a consensus on reducing Idlib tensions.

"On both sides, the focus has been on reducing tensions on the ground while continuing to fight terrorists recognized by the United Nations Security Council," the statement read.

Turkish President Recep Tayyip Erdogan, however, said that he had asked his Russian counterpart, Vladimir Putin, to step aside in Idlib and leave Ankara to deal with Damascus alone.

"I asked Mr Putin: 'what's your business there? If you establish a base, do so but get out of our way and leave us face to face with the regime,'" Erdogan said, recalling his Friday's telephone conversation with the Russian president.

He further complained that Turkey can no longer handle new waves of refugees and would let them travel on to Europe.

"What did we do yesterday (Friday)? We opened the doors," he said. "We will not close those doors ...Why? Because the European Union should keep its promises."

Erdogan also estimated that 18,000 migrants have amassed on the Turkish borders with Europe since Friday, warning that the number could reach as many as 30,000 on Saturday.

Tensions surged in Idlib on Thursday after dozens of Turkish soldiers were killed in an airstrike by Syrian forces.