Police in Kazakhstan detain dozens amid rage over activist’s death

Police in Kazakhstan have detained dozens of people in the Central Asian country's largest city Sunday, after an activist's death in jail triggered diplomatic condemnation and calls for anti-government rallies. 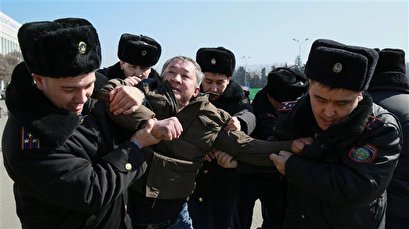 AFP correspondents in Almaty saw around 40 people detained by police close to the city hall, where two opposition groups had called for anti-government rallies.

Elsewhere in the city, 26 members of Oyan Qazaqstan, one of the groups that called for a rally, were detained in the morning before they had a chance to reach the protest site, a member of the group told AFP.

"According to our information, they have not been released yet," Dimash Alzhanov, one of Oyan Qazaqstan's founding members, told AFP by telephone.

One man who AFP correspondents saw bundled into a van full of detainees by black-clad police appealed to "the lawmakers in the European parliament", which sent a delegation to Kazakhstan last month.