Tehran 02 March_Pete Buttigieg dropped out of the race for the Democratic presidential nomination on Sunday, saying he no longer saw a chance of winning, the day after fellow moderate Joe Biden won a big victory in South Carolina. 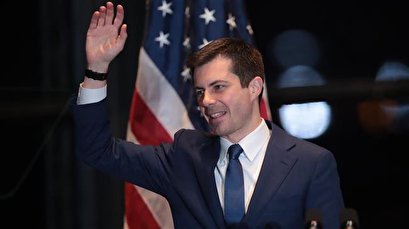 TEHRAN, Young Journalists Club(YJC)_The move shook up the Democratic contest to pick a candidate to take on Republican President Donald Trump in November's election and came two days before the 14-state Super Tuesday nominating contests that will offer the biggest electoral prize so far.

Buttigieg, a 38-year-old former mayor of South Bend, Indiana, who gained early momentum after he narrowly won the Iowa caucuses last month and finished a close second in New Hampshire, had sought to unite Democrats, independents and moderate Republican voters. But he finished a distant third in Nevada and fourth in South Carolina.

"Today is a moment of truth ... the truth is that the path has narrowed to a close for our candidacy if not for our cause," Buttigieg told supporters in South Bend on Sunday night. "Our goal has always been to unify Americans to help defeat Donald Trump and to win the era for our values."

His departure leaves six contenders in the Democratic presidential race, which once had more than 20 candidates. An adviser told Reuters that Buttigieg was dropping out to avoid helping the odds of front-runner Bernie Sanders, a senator from Vermont and self-described democratic socialist.

"Pete was not going to play the role of spoiler," said the adviser, who spoke on condition of anonymity. "Could he have went through Super Tuesday and beyond? Sure. But this was not a vanity exercise."

Buttigieg and Biden attempted to talk by telephone on Sunday but did not connect, according to a Buttigieg adviser.

Earlier on Sunday, Democratic candidates commemorated the anniversary of a landmark civil rights march in Alabama in 1965.