Tehran 05 March_After a not-so-Super Tuesday, Michael Bloomberg is out of the presidential nomination contest. But the power of his $60 billion fortune is staying in. 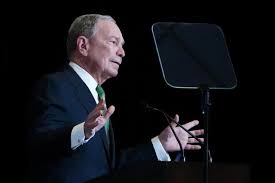 TEHRAN, Young Journalists Club(YJC)_Bloomberg on Wednesday switched from being a candidate to being a powerful backer of former Vice President Joe Biden, who dominated March 3 Super Tuesday voting in the race to challenge President Donald Trump in the November 3 election.

Bloomberg, the 78-year-old former mayor of New York and one of America's richest people, performed poorly at Tuesday's polls, winning only the U.S. territory of American Samoa despite spending more than $500 million in an unprecedented ad blitz.

In announcing he was ending his presidential run, he also endorsed Biden, who like Bloomberg is a moderate and is now the leading contender to take on the self-described democratic socialist, U.S. Senator Bernie Sanders.

"I will work to make him the next president of the United States," Bloomberg said in a statement.

It was not immediately clear how Bloomberg would support Biden and what was next for his vast experiment in political advertising. When asked what the support will look like, an official in Bloomberg's former campaign pointed to his past pledge to keep campaign infrastructure in place through November to help Democrats defeat Trump.

Bloomberg was scheduled to address staff and supporters later on Wednesday.