Tehran 05 March_Leader of the Islamic Revolution Ayatollah Seyyed Ali Khamenei has warned the government of India against continued massacre of Muslims, saying that the current pogrom going on against Muslim people in the South Asian country will lead to isolation of New Delhi in the Islamic world. 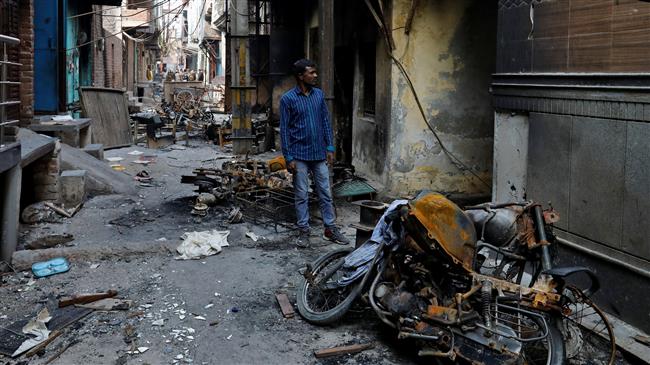 TEHRAN, Young Journalists Club(YJC)_The Leader made the remarks in a statement tweeted in Urdu and English on Thursday in condemnation of the brutal killing of more than 40 Muslims during a four-day span of violence that began in New Delhi on February 23.

“The hearts of Muslims all over the world are grieving over the massacre of Muslims in India,” Ayatollah Khamenei remarked.

“The govt. of India should confront extremist Hindus & their parties & stop the massacre of Muslims in order to prevent India’s isolation from the world of Islam,” the tweet went on. The violence saw the Hindu mobsters setting mosques on fire and burning Muslims alive in their homes or dragging them out into the streets and lynching them.

Hundreds more were also injured during the melee.

On Monday, Iranian Foreign Minister Mohammad Javad Zarif wrote a tweet, urging “Indian authorities to ensure the well-being of ALL Indians & not let senseless thuggery prevail,” adding that the “path forward lies in peaceful dialogue and rule of law.”

India summoned the Iranian ambassador to New Delhi afterwards to protest the comments. The Indian Foreign Ministry’s spokesman Raveesh Kumar said a "strong protest was lodged against the unwarranted remarks," which he called "not acceptable."