Tehran 06 March_The Russian and Turkish presidents say they have come to an agreement on an imminent ceasefire regime in the northwestern Syrian province of Idlib, where Turkish violations have brought about an unwarranted flare-up of already high levels of violence. 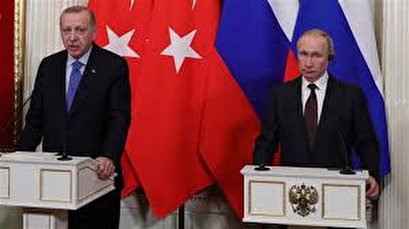 TEHRAN, Young Journalists Club(YJC)_Vladimir Putin and Recep Tayyip Erdogan made the remarks at a joint press conference in Moscow on Thursday after three hours of face-to-face talks.

Erdogan told reporters the truce would come into effect at midnight, and Putin said, "I express hope that these agreements will serve as a good basis for a cessation of military activity in the Idlib de-escalation zone.”

The zone and other similar ones were set up across Syria during talks that began in the Kazakh capital of Astana in early 2017 among Turkey, Russia, and Iran focusing on the Arab country .

Turkey was allowed to set up a number observation posts to supposedly contribute to de-escalation efforts. Turkish troops, however, are reported to have ventured outside the areas assigned for the posts and engaged in deadly clashes with Syrian soldiers.

Turkey has also been backing a number of militant groups in Idlib against Damascus in violation of all underway pacification efforts.

Another Syria talks format that took place in the Russian resort city of Sochi allowed Turkey to bring in a small number of troops to man the observation posts. Ankara, though, has sent thousands of troops and heavy military hardware into the province in an unprecedented incursion to back the militants.

Putin said he hoped that the Thursday deal will “stop the suffering of the peaceful population,” while Erdogan claimed, "We will work together to supply aid for the Syrians in need."