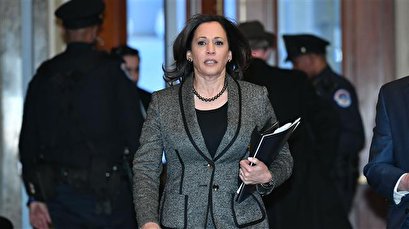 TEHRAN, Young Journalists Club(YJC)_Harris made the announcement in a statement on Sunday, saying that the former US vice president would “speak to the best of who we are, and challenges us to live up to our ideals” if elected.

"When I started my run for president, I said America needs a president who reflects the decency and dignity of the American people; a president who speaks the truth; and a president who fights for those whose voices are too often overlooked or ignored. I still believe that to this day. That is why I am proud to announce I am endorsing my friend, Vice President Joe Biden, for President of the United States," Harris said in the statement.

"I truly believe our nation is at an inflection point. And the decision voters make this November will shape the country and the world our children and grandchildren grow up in," she added. "I believe in Joe Biden and will do everything in my power to help elect him the next president of the United States."

The US Democratic Senator from California also shared a video on her Twitter page and expressed great "enthusiasm" to be endorsing Biden.

“One of the things we need right now is we need a leader who really does care about the people and who can therefore unify the people, and I believe Joe can do that,” Harris said.

The US Senator said she was thinking about the generations of people who fought and died for civil rights and “help our nation achieve its ideals.”

.@JoeBiden has served our country with dignity and we need him now more than ever. I will do everything in my power to help elect him the next President of the United States. pic.twitter.com/DbB2fGWpaa

“We still have yet to achieve those ideals but one of the greatest things about us is that we are willing to fight to get there,” she added. “So I just wanted you guys to know … I have decided that I am with great enthusiasm going to endorse Joe Biden. There is so much at stake in this election guys, so join me in supporting Joe. Let’s get this done.”

The latest endorsements have helped boost Biden’s lead over Bernie Sanders in the number of delegates.