Tehran 11 March_Joe Biden took a vice-like grip on the Democratic nomination race Tuesday with big primary wins in Michigan and other states confirming his growing advantage over leftist Bernie Sanders in the contest to take on President Donald Trump. 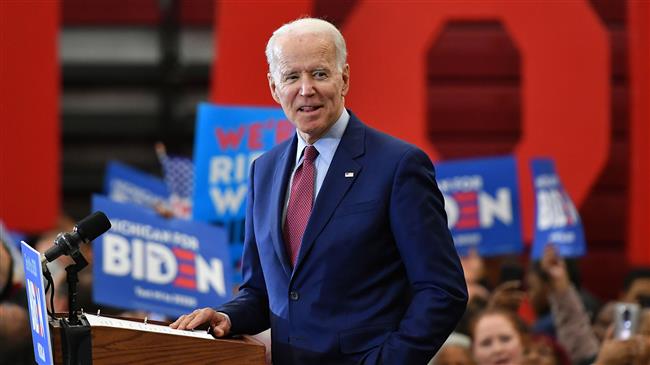 TEHRAN, Young Journalists Club(YJC)_First US networks projected a huge victory in Mississippi for Biden, reflecting his popularity among strategically vital African American voters. Then came Missouri and, biggest of all, Michigan — one of the industrial Midwestern giants due to be a key battleground in the general election.

"Thank you Michigan!" tweeted Biden, still waiting for results from three more states holding primaries before the night was over.

But if the veteran centrist and former vice president under Barack Obama might increasingly shift focus on trying to make Trump a one-term president, Sanders' next step remains a big question.

Will he fight on to the bitter end, as he did four years ago against the eventual nominee Hillary Clinton? Or will he bow out early?

Many Democrats blame the uncompromising, self-declared democratic socialist for subjecting Clinton to friendly fire just as she was struggling — ultimately unsuccessfully — against the Trump insurgency.

Adding to nerves in a country on edge after three tumultuous years under Trump, fears of the coronavirus epidemic prompted both campaigns to cancel election-night rallies.

Organizers of a live television debate scheduled Sunday, pitting the fiery Sanders and the moderate Biden, likewise said they would take the extraordinary step of not allowing the usual live audience.

For Biden, Tuesday's six-state contest, coming a week after his surprise comeback in voting on Super Tuesday, demonstrated that his once shambolic campaign is in rude health and now ready to face Trump.

Michigan in particular — an industrial giant that Trump won in an upset in 2016 — was targeted by Biden as a place to put down a marker ahead of the November election.

Sanders accused Biden of selling out to corporate interests and ignoring a passionate leftist base.