Tehran 11 March_Women in Bangladesh are promoting hygiene in the world's largest refugee settlement to prevent coronavirus from spreading there, aid workers said on Wednesday, after the nation reported its first case of the disease. 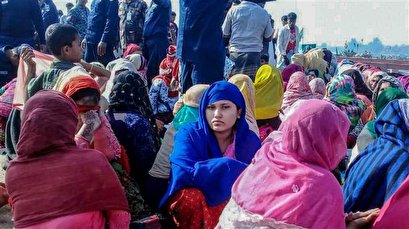 TEHRAN, Young Journalists Club(YJC)_A confirmed case of Covid-19 on the Greek island of Lesbos has sparked fears about the impact of an outbreak in refugee camps from Mexico to France where people live in dire conditions with poor hygiene and little medical care.

So far there are no reported cases of the virus in Bangladesh's densely-populated Cox's Bazar camps but medics are setting up isolation units in hospitals and teaching children about cleanliness through a network of mostly women volunteers.

Around 700,000 Rohingya refugees who arrived in Bangladesh in 2017 in a mass exodus from neighboring Myanmar live in huts built out of plastic and bamboo in an area half the size of Manhattan.

They face overstretched and poorly-resourced health services which is "why we have been advocating for refugees to be included in national preparedness and response plans," said Donovan.

Bangladesh confirmed its first three cases of coronavirus on Sunday and postponed a major public event marking the centenary of the country's founder.

Rohingya women, many of whom suffered sexual violence in Myanmar and who now run most of the camps' households are uniquely positioned to spread awareness about the disease, said Razia Sultana, a Rohingya lawyer.

"More than 70% of the people in the camps are women and children. These children will pick up habits from their mothers, so its important to get as many women trained as possible," said Sultana.

Shamima Bibi, a refugee who runs several schools said that she has started telling students to "stay as clean as possible" in order to not get infected.

"Not just in class but in other places in the camps as well, we are telling everyone to wash their hands and cover their face while sneezing and do whatever we can to stay safe," she told the Thomson Reuters Foundation.

Bibi said people in the camps are not "excessively worried" about the virus but have been cautious ever since Bangladesh confirmed the presence of the disease in Dhaka, about 400 kilometers away.

The U.N. has trained hundreds of health staff to detect the infection in an attempt to provide early warnings should the virus spread to the camp, said Donovan.