Tehran 12 March_The dollar careened against the euro and yen on Thursday after US President Donald Trump rattled markets with a month-long ban on European travel to the United States. 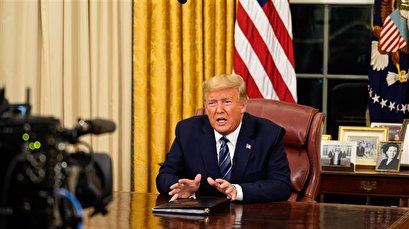 Trump on Wednesday suspended all travel from Europe to the United States for 30 days starting on Friday in order to fight the Coronavirus.

In a televised address to the nation, he said the restrictions applied to all of Europe, excluding the United Kingdom. Trade would not be affected by the curb.

"Already we know the economic impact is significant, and with this additional measure on top it's just going to multiply the impact across businesses," said Khoon Goh, head of Asia research at ANZ in Singapore.

"This is something that markets had not factored in...it's a huge near-term economic cost."

The US move comes on top of a string of increasingly dire news on the Coronavirus that has ended the longest bull run in US stock market history and sent world markets into turmoil.

The World Health Organization overnight described the outbreak as a pandemic. Italy, where deaths rose by nearly a third overnight, has shuttered all shops except  supermarkets, food stores and pharmacies.

Investors are also waiting to see how aggressively the European Central Bank (ECB) moves when it meets later on Thursday.

Investors expect the ECB will cut its main deposit rate by 10 basis points. But it is no certainty since rates are already at a record-low -0.5% and further cuts could hurt bank margins and so squeeze lending.

A press conference is due at 1230 GMT in Frankfurt, after the monetary policy meeting. It follows emergency rate cuts in by the Federal Reserve and the Bank of England, and the expectation of more to come.

Futures markets have priced the lower band of the US Fed funds rate hitting zero by next week.

"There's a sense to which currency markets are going to reward the currencies of countries that are seen to be using whatever space they've got for easier fiscal and monetary policy," said Ray Attrill, head of FX strategy at NAB.

"(But) even if the ECB wheel out a cocktail of lower rates, stepped up QE, more long-term ... in itself, that's not going to inspire a huge amount of confidence that the eurozone economy is going to escape recession. The hope would be that we'll have something more tangible on the fiscal side sooner rather than later."