Two Americans, Briton killed in attack on base housing US troops near Baghdad: Report

Tehran 12 March_Two Americans and a British personnel are killed after over a dozen Katyusha rockets hit a military base housing American troops near the Iraqi capital Baghdad, a report says. 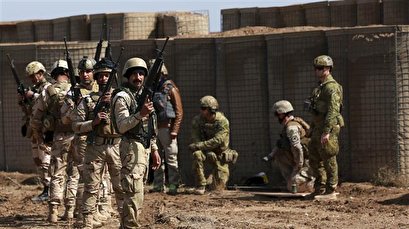 TEHRAN, Young Journalists Club(YJC)_Citing two unnamed US officials, Reuters reported that based on preliminary information, about a dozen coalition members had also been injured in the Wednesday attack against Iraq's Taji military camp, located some 30 kilometers (18.6 miles) north of Baghdad.

The US-led military coalition in Iraq said in a statement that 18 107mm Katyusha rockets struck the base and suggested they may have been fired from a truck.

It confirmed three troops were killed and about a dozen wounded but declined to disclose the nationalities of the casualties or offer any other identifying information.

"The attack is under investigation by the coalition and Iraqi security forces," the military coalition said.

Earlier, the Iraqi Interior Ministry's Security Media Cell announced in a statement that the incident took place in the evening when 10 rockets landed on Camp Taji, located some 30 kilometers (18.6 miles) north of Baghdad.

The statement added that a Kia Bongo pickup truck with a missile launcher was found south of Baghdad's al-Rashidiya district. It had three missiles in its back.