Iran doing its best in COVID-19 battle despite lack of equipment: WHO

Tehran 12 March_Director General of the World Health Organization (WHO) says the Islamic Republic of Iran is doing its best in fight against the novel coronavirus despite a lack of sufficient equipment and facilities mainly caused by the US sanctions. 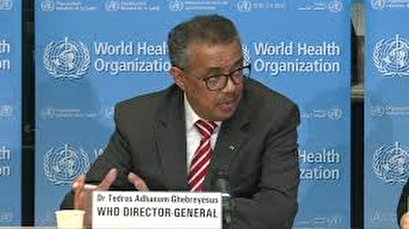 TEHRAN, Young Journalists Club(YJC)_We know that Iran is doing its best, all it can ... that's what I appreciated," Tedros Adhanom Ghebreyesus said at a press conference at the organization’s headquarters in Geneva, Switzerland, on Wednesday.

"They need lots of supplies, and ... we have tried to support as much as we can, but there is still a shortage," he added.

The WHO chief's remarks came a few hours after the Iranian Foreign Ministry slammed the United States for blocking the entry of foodstuffs and medicine into Iran through its unlawful sanctions.

Asked about the impact of US sanctions on Iran’s fight against the virus, Foreign Ministry spokesman Abbas Mousavi said Wednesday, “The oppressive and illegal American sanctions, which [have been imposed on Iran] within the framework of the ‘maximum pressure’ campaign, have affected public welfare and health in Iran.”

“Although medicine and medical equipment should be exempt from the sanctions…the course of relevant transactions has been blocked,” he told media representatives via video-link on Wednesday. “However, they brazenly claim that medicine and foodstuffs are not subject to the sanctions,” the official added.