Tehran 15 March_For the second time in less than a week, the US has intercepted Russian maritime surveillance aircraft in what's known as the Alaska Air Defense Identification Zone, military officials announced Saturday. 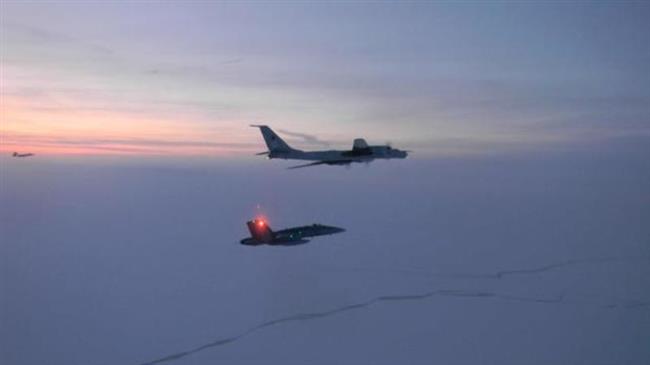 "The Russian aircraft entered the ADIZ from the West and North of Alaska respectively," officials with the North American Aerospace Defense Command, or NORAD, said in a release. "The western pair of Tu-142s remained within the ADIZ for approximately 4 hours and loitered in the vicinity of the U.S. Navy’s ICEX where they are conducting submarine exercises. The Tu-142s were escorted by F-22s the entire time."

The ADIZ surrounds the U.S. and Canada and stretches west to Alaskan islands south of Russia.

A pair of Tu-142s to the north spent only about 15 minutes in the zone, and also received an F-22 escort, officials said.

ICEX, which began March 5, is an Arctic preparedness exercise involving two U.S. Navy submarines, forces from five different countries and more than 100 participants. The exercise requires troops to set up a temporary camp on an ice floe and use the camp as a command center for submarine operations taking place below the ice, at temperatures averaging negative 27 degrees Fahrenheit.

Multiple news outlets reported Thursday that Russian Tu-95 heavy bombers had been spotted over international waters above the exercise.

On Tuesday, officials announced that F-22s and Canadian CF-18s had intercepted a pair of Russian Tu-142 spy planes north of Alaska in the ADIZ, which is jointly defended by U.S. and Canada. As with the most recent intercept, the Russian aircraft stayed in the region for roughly four hours, but never entered U.S. airspace.

"The Russian aircraft remained in international airspace in the Beaufort Sea coming within 45 nautical miles of the Alaskan coast," officials said of the Saturday intercept.

"This is the second and third time this week that incursions into our air defense identification zones were met and escorted by NORAD fighters," General Terrence J. O'Shaughnessy, NORAD Commander, said in a statement. "We continue to see repeated Russian military aviation activity in the Arctic and we will defend the U.S. and Canada against these threats emanating from our northern approaches."