Tehran 16 March_Spain’s King Felipe VI has distanced himself from his father, a former monarch who has been hit by allegations of financial irregularity. 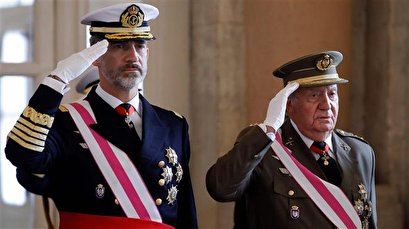 TEHRAN, Young Journalists Club(YJC)_Felipe renounced his personal inheritance from his father and stripped the former King Juan Carlos 1 of his annual stipend on Sunday.

A statement by the Royal House said King Felipe renounced his inheritance, including “any asset, investment or financial structure whose origin, characteristic or purpose may not be in accordance with the law or with the rectitude and integrity” of the crown.

The move came after media reports emerged that Felipe was poised to receive millions from a secret offshore fund with ties to Saudi Arabia. In 2008, when Juan Carlos was still in power, he had allegedly set up the secret offshore fund and named Felipe as a beneficiary.

The 82-year-old former monarch, who had been receiving an annual stipend of around 194,000 euros (216,000 dollars), abdicated in 2014 after a series of scandals ruined his public image and his popularity sank.

Since taking the throne, Felipe has made efforts to repair the royal family’s tarnished image.

That hard task was made even more difficult after his sister, Infanta Cristina, was caught up in a financial scandal involving her husband, the former Olympic handball player Iñaki Urdangarín.

The money was deposited in a Swiss bank account in the name of a Panamanian foundation, the paper said.

A separate report published by The Daily Telegraph alleged that Felipe was a beneficiary of the offshore fund.

The alleged offshore account held a “donation” of around 72.5 million dollars paid by “the king of Saudi Arabia,” according to The Sunday Telegraph.  The account was set up at an office in Panama City and tied to an account with Geneva’s Mirabaud private bank, according to the report.

Reports said the fund could be linked to kickback payments to the former monarch for his alleged involvement in brokering business deals with Saudi Arabia.

But Spain’s Royal House claimed in its official statement that Felipe and Juan Carlos had no knowledge of the fund.