Tehran 17 March_The Russian Foreign Ministry has lashed out at Washington's “inhuman" sanctions against Iran in the middle of its battle against the deadly coronavirus. 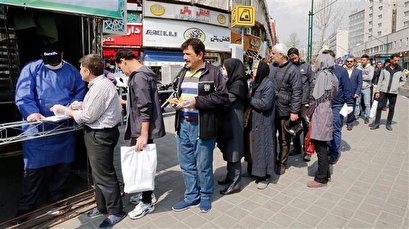 TEHRAN, Young Journalists Club(YJC)_The ministry said in a statement that  the US sanctions create a strong barrier for Iran that has been hit heavily by the virus.

"Illegal unilateral US sanctions, imposed since May 2018 as part of the ‘maximum pressure’ campaign, are a powerful obstacle to effective fight against the infection,” it said.

“The reason for the many victims, caused by it, lies not only in the disease itself, but also in the fact that the US, purposefully hinder the resistance [to the coronavirus],” the statement added.

"Millions of Iranian citizens were cut off from the possibility of purchasing necessary medical supplies, no matter how hard Washington tried to distort it. The anti-human policy of the US provokes deep regret, alarm and serious concern," it went on to say.

"The global pandemic is not a time for settling geopolitical accounts, especially those that have no basis, invented in Washington for the purpose of satisfying their own ambitions," it said.

The statement came shortly after Iran's Foreign Minister Mohammad Javad Zarif urged the UK and other European countries to defy the US bans as they hamper the Islamic Republic’s fight against COVID-19.