Tehran 17 March_Iran has major plans for modernizing its domestic feed industry. The long-awaited market liberalization should be accompanied by major state aid to feed mills. 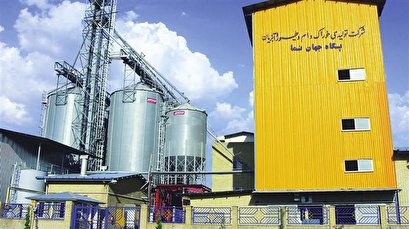 TEHRAN, Young Journalists Club(YJC)_Besides modernizing the feed industry, Iran has set its sights on exporting large quantities of feed across the Middle East. Ambitious goals needed to be achieved in the context of tough US sanctions and strong dependence on imports of feedstuffs, feed additives and machinery. Dr Majid Movafegh Ghadirly, chairman of the Iran Feed Industry Association, reveals the details.

What is the capacity of Iran’s feed production per year and what is your forecast for production in 2030?

The established production capacity of Iran’s animal feed industry is 21 million tonnes of production per annum. However, Iran’s actual production performance was around 11 million tonnes in 2019, 6.3 million tonnes of which was livestock feed, 4.2 million tonnes poultry feed and 400,000 tonnes aquaculture feed. Also, around 100,000 of feed was produced for other species such as camels, ostriches, turkeys, pets, etc. By 2030, population growth is expected to drive domestic feed demand to 26 million tonnes. It is anticipated that about 200 animal feed mills will be established in the country, with a total capacity of about 7 million tonnes. In 5 years feed produced on animal farms will be banned. The government provides the animal feed sector with appropriate facilities for supporting working capital, as well as facilities for modernizing the equipment on production lines and for protecting the environment. So there will be strong support for feed production at the feed mills. In addition, more than 19.5 million tonnes of agricultural and horticultural residues are produced annually in the country and there are 5 million tonnes of waste from food factories and food industries that are not yet fully used for animal feed. However, last year we used leftovers of pistachios, sugarcane, dates and potatoes for ready-to-use feed, so this is one of the serious steps we are taking towards sustainable development.

Why does the Iranian government want to ban on-farm feed production by 2023?

Like everywhere, animal feed safety, health monitoring and sustainable development throughout the supply chain are important issues in Iran. Also, as Iran’s economy moves towards complete economic liberalization, we will welcome an oil-free economy. For this reason, the government is planning to remove production subsidies and, as a result, feed production at animal farms will no longer make any economic sense, so it should be withdrawn without any ­additional incentives.

Have you noticed any negative impact from the US sanctions on the industry?

We cannot say that the sanctions have not affected the industry. They certainly affected the animal feed sector and have slowed down the pace of growth.The average annual growth rate of the Iran feed industry is 11%. It is expected that 800 feed mills will be in operation in Iran by 2030, which is higher than the global average, but this number lags far behind our planned growth. Regarding modernization and importing equipment, machinery and technology, it should be noted that the government currently gives subsidies to feed production units and also considerable subsidies are planned to be allocated to modernize 30 production units with the use of more state-of-the-art technology every year. Meanwhile, with the participation of the National Iranian Standards Organization and the Ministry of Agriculture Jihad, the decision has been made to prevent the import of ‘weak’ machinery and brands into Iran.

Could you shed some light on how Iran is going to move to a liberalized economy in the feed industry?

As the Iranian economy moves from a petroleum economy to a free economy, all subsidies will be lifted, real currency prices will be truly real, and import tariffs will be cut. Export limitations in relation to animal feed will be dropped and government intervention in pricing of protein products will be abandoned. All these measures should make the role of animal feed mills in Iran’s economy stronger. Right now, all agricultural products in Iran are subsidized. All feedstuffs benefit from the governmental currency exchange rate for imports. The government is allocating funds to avoid a price hike because of the devaluation of the national currency. All these measures are aimed at reducing the price of protein products, including milk, eggs and meat so that their per capita consumption does not go down and, despite the impact of sanctions on the purchasing power of Iran’s population, they can consume enough protein products.

What is the situation regarding feed additives and premixes, such as amino acids? Are there any problems in this area because of currency exchange fluctuations?

In 2019, Iran imported 99,000 tonnes of amino acids, supplements and feed additives worth €300 million from 41 countries. We had no problems with currency fluctuations when importing feed additives. However, we are facing serious challenges in transferring money due to the sanctions on Iran’s banking sector. The most common poultry concentrates sold and used are at 2.5% and 5%. The total demand for these types of concentrates is 380,000 tonnes, about 150,000 tonnes of which are manufactured by Iran’s animal feed mills. Poultry premixes in Iran are mainly mineral and vitamin supplements of which about 65,000 tonnes are produced by Iranian feed mills. Farmers prefer to buy mineral and vitamin supplements separately and mix them on site. A considerable potential is seen in the concentrates market. The livestock industry requires a total of 60,000 tonnes of premixes and 10% or 6,000 tonnes is manufactured by feed mills.