Tehran 18 March_Joe Biden cemented his status as the likely Democratic presidential nominee Tuesday after trouncing Bernie Sanders in Florida and Illinois, the top prizes on a busy primary night blighted by the coronavirus pandemic. 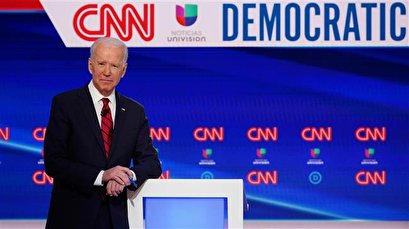 TEHRAN, Young Journalists Club(YJC)_The substantial margin of projected victory in the two states speaks to the speed with which many Democrats have begun coalescing around a potential flagbearer just one month after the former vice president's campaign was struggling badly against a surging Sanders.

Following a string of victories in high-profile contests and his show of strength Tuesday, the moderate Biden has now crossed the halfway point in terms of earning a majority of delegates needed to become the nominee.

With almost all Florida precincts reporting, the 77-year-old Biden led 62 percent to 23 percent against Sanders, a 78-year-old leftist senator from Vermont.

In Illinois, Biden was ahead 59 percent to 36 percent, with 58 percent of precincts reporting.

"Our campaign has had a very good night," Biden said in televised remarks from his home in Delaware. "We've moved closer to securing the Democratic Party's nomination for president, and we're doing it by building a broad coalition that we need to win in November."

Biden has long said that Americans do not want Sanders's political "revolution," they want results.

But he extended an olive branch Tuesday by appealing to Sanders supporters.

"To young voters who have been inspired by Senator Sanders 'I hear you,'" Biden said.

Americans were also voting in Arizona. Biden has led in polling there and is expected to do well.

A Biden trifecta would leave Sanders a gravely wounded candidate, having largely failed to reverse his fortunes after losing 18 of the last 23 contests.

"I think there's going to be enormous pressure for him to call the race, because it's over," Democratic analyst David Axelrod, chief strategist for Barack Obama's two successful presidential campaigns, said on CNN, referring to the likelihood of Sanders dropping out.

Sanders delivered a 20-minute speech online Tuesday. But the democratic socialist did not mention the primaries, focusing instead on his recommendations for addressing the coronavirus crisis, including injecting $2 trillion in funding to prevent deaths and "avoid an economic catastrophe."