The most powerful earthquake to hit Utah in 28 years shut down Salt Lake City’s airport, knocked out a coronavirus hotline and forced the evacuation of a refinery on Wednesday, officials said. 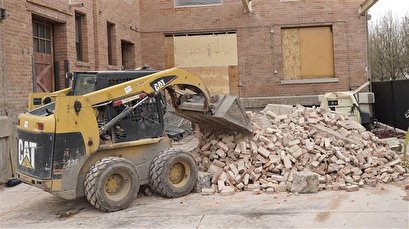 The 5.7-magnitude, early morning tremor centered in north-central Utah was the strongest the state has experienced since 1992, when a 5.9-magnitude quake rattled the St. George area in Utah’s southwestern corner, according to Utah Emergency Management.

The quake damaged the Angel Moroni statue atop Salt Lake Temple, the Mormon Church’s largest, knocking a trumpet from the angel’s hand. A church spokesman also said some of the temple’s smaller spire stones were displaced, according to the Deseret News.

Utah has a large Mormon population and holds a special place in the Church of Jesus Christ of Latter-Day Saints.

In Herriman, just south of the capital Salt Lake City, bricks from the facade of the Silver Crest Elementary School fell in front of the main entrance.

Cracks appeared in the brick facade of a Salt Lake City bank building, and rubble appeared on the sidewalk in front of an unoccupied building under construction, social media images showed.

Governor Gary Herbert said the state’s poison control center at the University of Utah in Salt Lake City was evacuated while officials assessed the damage, and he said the coronavirus hotline was down.

Please stay away from the downtown area while crews assess damage. Unless you work in public safety, or are an essential employee, remain at home or telework,” the governor wrote on Twitter.

The Utah Department of Health said it set up a temporary hotline for information about the coronavirus.