Taliban ‘infiltrators’ kill dozens of Afghan troops, policemen in attack on army base

Tehran 20 March_At least two dozen Afghan security forces and policemen have been killed and several others are missing after “Taliban infiltrators” attacked them in an army base in southern Afghanistan. 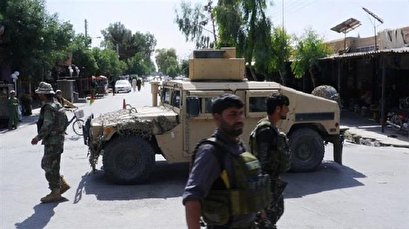 Four other members of the Afghan security forces were also missing, he added.

Bayan said that the attackers, who “had connections with the Taliban,” fled in two military Humvee vehicles, along with a pickup truck, weapons and ammunition.

The attack has become the deadliest since the Taliban signed a deal with the United States in the Qatari capital, Doha, late last month.

Under the deal, the Taliban have agreed to sever ties with al-Qaeda and other terror groups and sit down for peace talks with the Afghan government. In return, Washington will start a phased withdrawal of troops.

The Afghan government was a party neither to the negotiations nor to the deal that was primarily aimed at reducing violence in the war-torn country.

Since it was signed, however, violence has escalated with the militants carrying out dozens of deadly attacks across the country.