Tehran 22 March_Top Trump administration aides have clashed over whether the US should escalate tensions with Iran militarily, a report suggests. 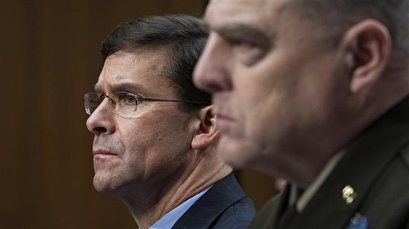 Defense Secretary Mark T. Esper and Gen. Mark A. Milley, the chairman of the Joint Chiefs of Staff, meanwhile, oppose the increase in tensions.

The war hawks blame Iran for a rocket attack last week on US-occupied Camp Taji about 27 kilometers north of the Iraqi Baghdad, in which one British and two American personnel were allegedly killed.

The report noted that, “the Pentagon and intelligence agencies did not have clear evidence that the attacks… had been ordered by Iran.”

President Donald Trump brought US and Iran to the brink of war after ordering the assassination of Major General Qassem Soleimani on January 2.