Tehran 23 March_Israeli troops have shot dead a young Palestinian man after he allegedly threw stones near a checkpoint at the entrance to the town of Ni'lin, located west of Ramallah. 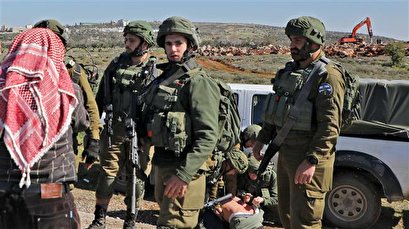 TEHRAN, Young Journalists Club(YJC)_The Palestinian Ministry of Health confirmed on Sunday that the man has lost his life after being shot by the Israeli troops’ gunfire.

A spokesperson for the Israeli military claimed the Israeli forces had thwarted an “attempted terrorist attack” near the N'ilin Junction on Sunday night.

His claim comes as he himself admits the man killed by Israeli troops was among a number of people “throwing stones” toward Israeli vehicles.

The Israeli forces have fired at those stone-throwing Palestinians, hitting and killing one of them and injuring another who escaped from the scene, the spokesperson said.

WAFA news agency said the Israeli military even prevented an ambulance from transferring the young man to the hospital.

Back on March 11, Israeli forces shot and killed a 15-year-old Palestinian during a protest against a tour organized by Israeli settlers to a historical site in a West Bank village.