Tehran 23 March_US Secretary of State Mike Pompeo has arrived in Afghanistan on a trip that aims to save the so-called peace deal signed between the Taliban and the United States. 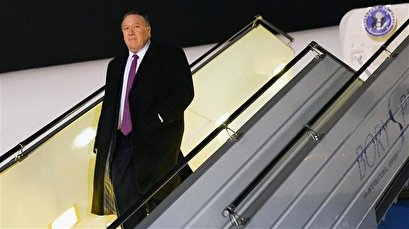 TEHRAN, Young Journalists Club(YJC)_Pompeo, who landed in Kabul on Monday on a previously unannounced visit, will meet with Afghan President Ashraf Ghani and his political rival Abdullah Abdullah.

Under the deal signed in the Qatari capital, Doha, late last month, the Taliban agreed to sever ties with al-Qaeda and other terror groups and sit down for peace talks with the Afghan government. In return, Washington will start a phased withdrawal of troops.

The February 29 deal was primarily aimed at reducing violence in the war-torn country, but violence has escalated with the militants carrying out dozens of deadly attacks across the country.

In the latest incident, at least two dozen Afghan security forces and policemen were killed and several others went missing after “Taliban infiltrators” attacked them in an army base in southern Afghanistan.

Meanwhile, Pomepo’s visit aims to resolve the impasse created in the so-called peace process as the country's leaders have not yet reached an agreement over who was elected president in the September 2019 disputed election.

Ghani and Abdullah have recently held rival swearing-in ceremonies. The two rivals had earlier postponed their plans to hold parallel inauguration ceremonies to allow for more time to resolve their differences over the 2019 vote.