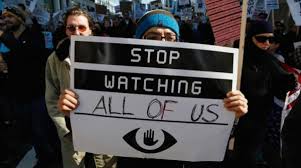 The Post based their assertion on a four-month study of a large cache of NSA-intercepted electronic data provided by fugitive NSA contractor Edward Snowden.
According to The Post, nine of 10 account holders found in the data "were not the intended surveillance targets but were caught in a net the agency had cast for somebody else."
Those people were ordinary Internet users, both in the United States and elsewhere.
The study was based on some 160,000 emails and instant message conversations, as well as 7,900 documents taken from more than 11,000 online accounts, intercepted during President Barack Obama's first term in office (2009-2012).
Nearly half of the surveillance files "contained names, e-mail addresses or other details that the NSA marked as belonging to US citizens or residents."
While NSA staff masked, or "minimized," more than 65,000 references to protect the privacy of Americans, The Post found almost 900 other e-mail addresses, unmasked, that could be linked to US nationals or residents.
The Post also found that the NSA held on to material that analysts described as "useless."
These files "tell stories of love and heartbreak, illicit sexual liaisons, mental-health crises, political and religious conversions, financial anxieties and disappointed hopes."
Some of the files however included "discoveries of considerable intelligence value."
Although the newspaper said little "to avoid interfering with ongoing operations," they did say that  this included "revelations about a secret overseas nuclear project, double-dealing by an ostensible ally, a military calamity that befell an unfriendly power, and the identities of aggressive intruders into US computer networks."
Last week the Post reported that all but four countries - Britain, Canada, Australia and New Zealand -- were seen as valid spy targets for the NSA.
Germany's parliament is investigating the extent of spying by the NSA and its partners on German citizens and politicians, and whether German intelligence aided its activities.
Snowden, a 30-year-old former NSA contractor, was granted temporary asylum by Russia last August after shaking the US intelligence establishment with a series of devastating leaks on mass surveillance in the United States and around the world.
AFP
Share to
Tags
Regular people ، foreigners ، NSA ، spying
Your Comment