IRGC gearing up for biodefense maneuvers, disinfection operations across Iran

Tehran 24 March_Iran’s Islamic Revolution Guards Corps (IRGC) is gearing up for fresh biological defense drills as well as countrywide disinfection operations amid warnings that the new coronavirus pandemic may be the outcome of a biological attack targeting certain nations. 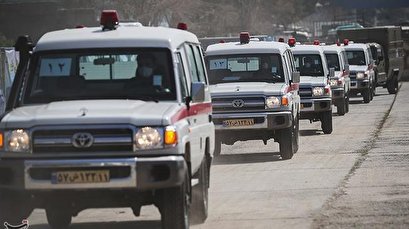 TEHRAN, Young Journalists Club(YJC)_Addressing a press conference in Tehran on Tuesday, Brigadier General Mohammad Pakpour, the commander of the IRGC’s Ground Forces, said the massive drills would start on Wednesday.

“The clean-up operations will be carried out in 3,000 locations across the country and 100 spots in Tehran,” he added.

He noted that all medical centers belonging to the IRGC’s Ground Forces, including field hospitals, will be put to use at full capacity during the exercise.

The senior commander said a total of 100 units of the IRGC’s Ground Forces operating in 10 bases have been organized to conduct the disinfection operations.

Pakpour added that the exercises would be staged in coordination with the Health Ministry’s National Headquarters for Managing and Fighting the Coronavirus and in line with the Armed Forces’ policies. The maneuver, he added, would involve all units of the IRGC, with the Ground Forces taking the lead.

He emphasized that all the IRGC’s measures, including the treatment of the coronavirus patients and disinfection, have been conducted based on the requirements of the national HQ tasked with containing the virus.

The IRGC has set up filed hospitals along with convalescent homes in many provinces across the country, including Kashan, Tehran, Urmia, Gorgan, Babol, Ahvaz, Kermanshah and Sanandaj.

Similar drills were staged in mid-March after Leader of the Islamic Revolution Ayatollah Seyyed Ali Khamenei warned in an edict addressed to Chairman of the Chiefs of Staff of the Iranian Armed Forces Major General Mohammad Baqeri that the coronavirus outbreak might be the result of a “biological attack” against the Islamic Republic.

“Since there is some evidence that this incident might be a ‘biological attack’, this measure could be also some form of biological defense drill, which would add to national power and strength [of the country],” the Leader said.

The highly-contagious virus — named COVID-19 — first showed up in China and later spread to other countries of the world. Iran has been among the states worst hit by the pandemic.

Iranian Health Ministry spokesman Kianoush Jahanpour said on Tuesday that the number of coronavirus deaths had increased to 1,934 and the total infections to 24,811 during the past 24 hours.

Jahanpour further put the number of patients who have recovered from the viral disease at 8,913.

General Nasrollah Fathian, in charge of coordinating executive operations at the National Headquarters to Fight the Coronavirus, said on Monday that Iranian scientists and intelligence experts are examining the possibility of the coronavirus being a biological warfare waged against the Iranian people.