Tehran 25 March_Former US Secretary of State Hillary Clinton has urged Americans not to listen to President Donald Trump’s advice amid the coronavirus pandemic. 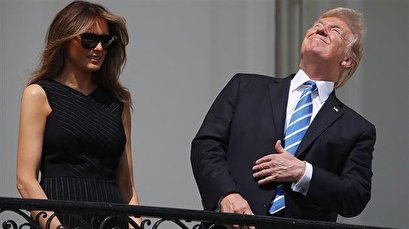 TEHRAN, Young Journalists Club(YJC)_Trump’s 2016 contender took to Twitter Tuesday as his critics blamed him for his confusing press briefings and networks were urged not to report his statements about the fast growing pandemic.

“Please do not take medical advice from a man who looked directly at a solar eclipse,” she said, referencing his removal of his protective glasses during an August 2017 eclipse and looking up at the sky.

The country has reported more than 100 deaths in a single day for the first time and the death toll has passed 500 with more than 41,000 infected.

“There will be no normally functioning economy if our hospitals are overwhelmed and thousands of Americans of all ages, including our doctors and nurses, lay dying because we have failed to do what’s necessary to stop the virus,” Republican Rep. Liz Cheney tweeted on Tuesday.

Former Food and Drug Administration chief Dr. Scott Gottlieb has also warned that as long as the virus continues to spread in major US cities a functional economy is unlikely.