Tehran 25 March_Amid a worldwide outcry against the United States’ illegal and unilateral sanctions imposed on Iran, a popular campaign has been launched to pressure Washington into temporarily lifting the sanctions that are obstructing the Iranian people’s efforts to curtail the deadly coronavirus outbreak. 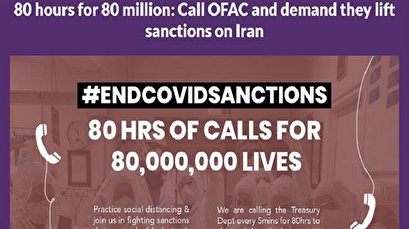 The ‘80 hours for 80 million campaign’ has been launched on the New/Mode advocacy platform to promote this cause.

The participants are required to enter their phone numbers on the campaign’s webpage which will then put them through to the US Treasury Department’s Office of Foreign Assets Control so they can demand that OFAC enable the temporary sanctions relief.

“We’re making 80 hours of calls to OFAC on behalf of 80 million people,” reads the campaign’s manifesto.

The United States reinstated its sanctions against Iran in May 2018 after leaving a United Nations-endorsed nuclear agreement with the Islamic Republic and five other countries.

Tehran sued Washington at the International Court of Justice afterwards. The tribunal ruled that the US should lift its sanctions on humanitarian supplies.

Washington claims that it has exempted foodstuffs and medicine from the bans, something that Tehran entirely disputes.

The Islamic Republic has written to the United Nations and all international organizations, urging the removal of the vehicles of “economic terrorism” that have come in the way of its fight against the outbreak.