Prime Minister Recep Tayyip Erdogan appears all but assured of winning upcoming Turkish presidential polls, but he could find himself in charge of a far more fragile economy than in the last decade of his rule. 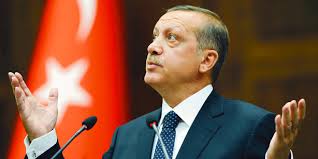 Analysts say the Turkish strongman is jeopardising the long-term health of the economy by picking a fight with the nominally independent central bank and pushing it towards a looser monetary policy at a time of stubbornly high inflation.
Meanwhile, the instability in neighbouring Iraq, where swathes of territory have been taken over by Sunni Muslim militants, risks depriving Turkey of a key export market.
Erdogan is credited during his more than a decade in power with turning around Turkey's economy, whose strong expansion has made it the envy of its European and Middle Eastern neighbours.
With one of the world's highest growth rates in 2010 at 8.9 percent, Turkey's economic success has become a political trump card that Erdogan hopes will help him win presidential polls on August 10.
He wants Turkey to be among the globe's top 10 economies by 2023 when it celebrates its 100th anniversary of becoming a modern republic.
"If elected, we will make Turkey fly in every sense," Erdogan said in a speech this week when he announced his presidential bid.
But the economy has begun showing signs of fragility over the past year as investors have turned against many of the world's emerging markets.
- 'Markets against Turkey' -
============================
Erdogan's government has faced unprecedented domestic challenges in the past year, including a vast corruption scandal and mass street protests that have frequently snowballed into violent clashes with police.
Meanwhile, he has waged an all-out war against the central bank, pressing for a sharp rate cut to boost growth ahead of this year's presidential vote and parliamentary polls in 2015.
A senior official from the ruling AKP party, Numan Kurtulmus, fuelled the controversy when he said Ankara must handle the "domination" of the central bank as it did the once-powerful army.
Andy Birch, senior economist at IHS Global Insight, said the central bank's independence was a "major concern" under an Erdogan presidency.
"The markets will decisively turn against Turkey -- exchange rate losses, deteriorating yields, net outflows of portfolio investment -- should these threats against the central bank come to fruition," he told AFP.
"Already, worries of political domination of monetary policy contributed to the end-2013 and early-2014 market instability."
To Erdogan's dismay, the bank hiked interest rates at the beginning of the year after the lira plummeted in response to a corruption scandal in the government and a global shift of funds out of emerging markets.
The bank has so far withstood pressure from Erdogan's government to cut interest rates more aggressively, which analysts say is one reason markets have held relatively steady in recent months.
Last month it shaved 75 basis points off its main interest rate, following up on a 50 basis point cut in May, taking it to 8.75 percent. These moves were seen as walking the fine line between retaining market credibility and placating Erdogan.
But it still fell short of meeting the hopes of the government, which wants rates cut back down to 4.5 percent, piling additional pressure on the bank ahead of its next July 17 meeting.
Annual inflation dropped to 9.16 percent in June from a two year high of 9.66 percent in May. The central bank has revised its forecast for end-2014 from 6.6 percent to 7.6 percent.
- Iraq crisis hits exports -
============================
The rise of a radical Islamist threat across Turkey's border in Iraq is also setting off alarm bells among investors.
Moody's rating agency warned this week the conflict in Iraq could hit almost 15 percent of the country's exports, equivalent to 3 percent of its gross domestic product.
"If the Iraq conflict continues for a prolonged period and also spreads to (Iraqi Kurdistan), it would have a material effect on Turkish exports... and would slow the country's economic growth," said Moody's.
As many as 550 companies had already halted imports to Iraq since the start of a lightning offensive by Islamic State of Iraq and the Levant (ISIL) in June, the head of the Turkish-Iraqi Business Council, Serif Ercument Aksoy, said last month.
Iraq was the second-largest buyer of Turkish goods last year, accounting for 8.0 percent of exports.
"Exporters are bearing the brunt of the crisis next door and Turkey must find alternative routes because trade routes to Syria and now to Iraq are blocked," Nihat Ali Ozcan of the Ankara-based TEPAV think-tank told AFP.
AFP
Share to
Tags
Erdogan ، Turkey ، economy
Your Comment